We arrived at about 11pm on Friday night. The first thing that hit us was how run down everything is, even in the airport. We thought that our bags got lost en route, but thankfully it turned out that the conveyer belt had broken but our bags had arrived safely.

We were met at the airport by a driver who took us to our first hotel, the Orchid, a fantastic 5 star hotel just a few minutes from the airport. We went to bed almost instantly and didn't get up until 6pm the following day.

In the evening, we made our way to Colaba, which was our first real experience of the Indian road network. It seems you're supposed to ignore all traffic signals and pedestrians while driving as close as you can to the vehicle next to you whist simaltaneously beeping your horn.

Today is Sunday, and we had to leave the oppulant surroundings of the Orchid for a more 'reasonable' hotel in Colaba. It's right in the centre of things and close to all the tourist sights. We visited the gateway of India, which is where the British marched through when ending their occupation. Some local priests painted Sandlewood spots on our foreheads and gave us sugar, flowers and bracelets for Divali. 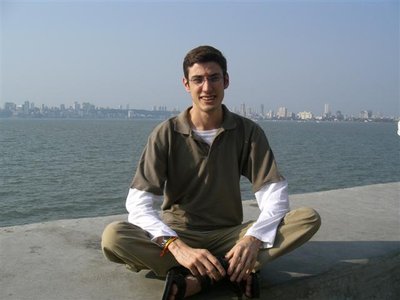 Me infront of the Mumbai seafront

Being white, we attracted large crowds. People wanted their photos taken with us, and young boys followed us taking pictures of us freaks on their mobiles. In the crowd, we met a tourguide who drove us all round the city. We've seen pretty much everything it has to offer - from Gandhi's house to place where they wash your clothes (I can't remember the name). We walked through the slums and came out next to the Mumbai Hilton - the contrast here is incredible. 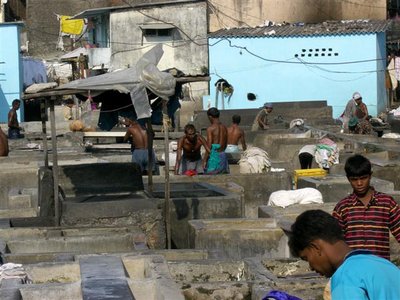 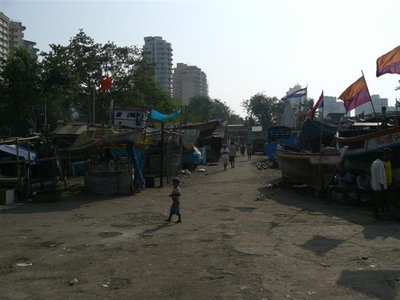 Mumbai shacks - just behind the camera is the Mumbai Hilton

Tomorrow we're making plans to leave Mumbai, heading for Pune (pronounced Poona) which is about 3.5 hours away by train. This should be more relaxing as it's a much smaller town. Mumbai station is pretty impressive... 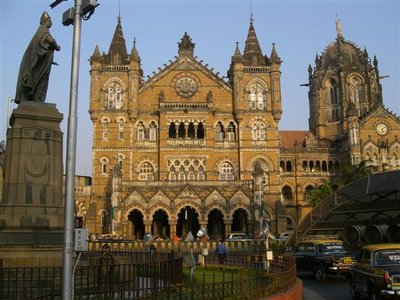 We've got some great pictures to put on here, but the internet cafe we're in at the moment isn't technically advanced enough to allow it, so they'll have to wait for another time.

We're all packed, and we set off from Heathrow terminal 1 tomorrow at 9:20am for our flight to Mumbai (formerly Bombay, apparently).

We still haven't decided where we're going to go once we get to Mumbai, but where ever we go, we need to end up at Delhi by the end of the month for a flight to Bangkok.

My bag weighs 40lbs, which is about a third of my total body weight. I've only packed the essentials: kettle, mug, tea bags etc , so I can't figure out why it weighs so much!

No doubt there'll be more news when we arrive!