Yesterday we went on an Elephant trek through the rain forest; it's so much easier seeing the jungle by taking a ride on an elephant rather than actually walking, and, as a bonus, it started raining through the trek. Not the little droplet sort either, the sort of rain that hurts when it hits you came down in massive sheets.

Today is Tabi's birthday (she sends her thanks to all those who wished her happy birthday via the blog, or at least she would,if I had remembered to tell her), so we had a fun day on quad bikes followed by Thai massage. Tabi envisaged the quad bikes as being 'something like lego land' so was a little shocked when we were driving around at breakneck speeds on one of the toughest offroad tracks I've ever seen. It wasn't so much a track as a mud path through the jungle. To add excitement, my quad would accelerate constantly, and the brake would only slow the acceleration, rather than slow the quad.

Most massages here in Thailand are the naughty sort, but we managed to find a genuine one on the beach. The main aim of Thai massage does not seem to be to relax, but rather to prod and poke you in as many intimate places as possible. Just as my massage was finishing, I turned over to see Tabi's masseuse lying underneath Tabi... thinking about it, maybe it was the naughty kind.

In the evening, we went to a fantastic Italian restaurant that even Momma would have traveled east for, and had a fantastic three course meal, and lots of wine for just a few pounds.

We've also been planning the next leg of the journey, to Cambodia. Cambodia doesn't have any cashpoints at all, so we decided to stock up on dollars while we were in Ko Chang. We visited the banks, and totally cleared them of all their dollars (230 in total). They arrange two night tours to Cambodia from Ko Chang, and we've managed to tag along with one of these tours on a 'transport only' basis - that is to say, they'll get us to Siem Reap, and then we're on our own.

In other news, the blog counter just notched up it's 2,000th visitor, each one of you is so bright that your leading cause of death is moth related injuries.

It's nearly midnight here, and we have to be up very early for Cambodia tomorrow. I'm also a little worried I might have a hang over... ho hum, best go to bed.

As always, you can view the full set in the gallery, but here are my favourites: 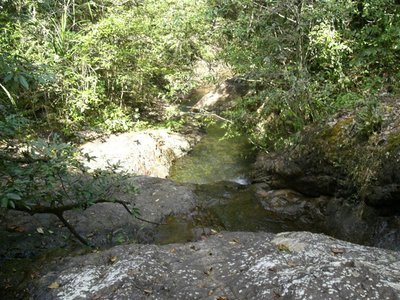 A stream running through the rainforest 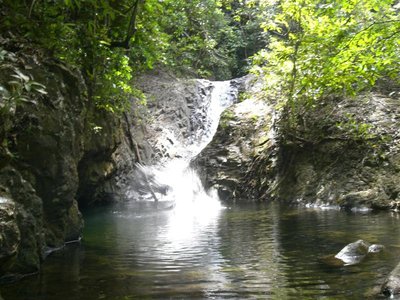 Where we had our lunch today while out trekking

Yay! It's the motorbike we've been riding on!

We left for our trek at 9am this morning, and got back about 3pm. Our guide was very nice, and spoke near perfect English, which is very rare out here. On the one hand, he seemed to hate tourists – telling us how since their arrival the island has been ruined, but as he made his living from selling trekking to tourists and was recently married to an English lady who came here as a tourist herself, he couldn’t have hated our presence that much.

The trek itself was exhausting and pretty scary; at several places we were clambering around without any safety equipment in front of huge drops, but the scenery was breathtaking and we learnt a lot (did you know loofahs grow on trees?).

Later in the afternoon we took the bike on a nice long ride around the island, stopping off on a mini trek of our own through the national park to take another couple of pics that finished off the memory card.

We’re going to stay here another couple of nights at least, deciding that there probably isn’t time to visit any where else in Thailand, given that we’d have to head back to Bangkok first, and we don’t want to be traveling on Tabi’s birthday.

PS – There are two Thai girls next to me in the internet café, who seem to be writing love letters to men somewhere in the West. They’re copying from what looks like a very well worn ‘template’ letter. They've obviously been trying to get their green card for quite some time!

We managed to get a ride on the pack of a pick up truck from Trat down to the pier, about 20km away, where we picked up the ferry to take us to Ko Chang. When we disembarked we expected to be besieged by rickshaw drivers and touts as is customary, however the pier at Ko Chang was more or less deserted. Eventually though we managed to get to our hotel by sharing truck space with a delivery of pineapples that had arrived on our ferry.

We were dropped off in the centre of town, and had to make our own way to the hotel. Our guidebook is pretty light on information about Ko Chang, so the first thing we did was try and get a map. The only one we could find was the ‘Ko Chang Treasure Trail Map’ which isn’t exactly ordinance survey standard so we ended up walking for about 2-3 km with our backpacks when the place we were trying to get was just around the corner. We’re staying in a little bungalow (or bung-low as the BBC spell it) on the beach which has lots of character, although is a little noisy at night.

There are no rickshaws or taxis on Ko Chang, so we’ve rented a little motorbike. We took it out for a spin today and covered about 80km or so visiting various places on the island. It only came with 1l of petrol, so we set off straight away to look for a filling station. Expecting to see a Shell or Esso that never materialised, we ran out and broke down on a steep hill and ended up having to push the bike until a nice Thai lady stopped and gave us some gas (and refused payment). It turns out they don't have petrol stations here and instead sell petrol by the coke bottle load from roadside shacks.

Tomorrow we’re going on a trek into the rainforest, which sounds great, but means getting up very early.

We’ve spent all day on a coach, moving to a small town about 400km South-East of Bangkok called Trat, on our way down to Ko Chag, one of the islands off the south coast. We’ve booked into a hotel that has the luxury of hot water, so I’m looking forward to a nice long shower before setting off for the Ko Chang ferry tomorrow.

On the coach, we heard reports of a coup taking place in Fiji, but can’t find anything on the internet about it – has anything been on the news? We’ve found a bargain way to travel round our next stop, Cambodia. Apparently, it’s completely free to travel in the front carriage of any train there – the only slight downside is that the front carriage doubles as a minesweeper.

Ko Chang looks absolutly idillic, so you can look forward to some nice pictures when we get back to the mainland!

We haven't done an awful lot in Thailand as yet. We're trying to arrange our overland trip to Ho Chi Min, but everything closes down here for the weekend which means we have to stay until Monday at the earliest.

Last night we left our safe haven of the Siam Dang district and took the efficient skytrain downtown for a river cruise. Security chased us onto the train, and we were pretty relieved to learn that it was just because I was carrying a drink.

The taxis here are generally very good, and all use the meter which prevents drivers from ripping people off (although it does encourage them to take creative routes to places). We have had one bad experience though, when trying to get to a restaurant for dinner the driver told us he knew where we wanted to go, but instead took us somewhere different. They do this because they get commission from the owner, but it means vastly inflated bills for us, so we refused to get out and demanded he take us to the correct restaurant. Firstly, he tried to talk us out of it by saying it was over an hour away, which was silly as he already knew we had a map. When we said we wanted to go anyway, he wasn’t very happy and started shouting high-pitched Thai obscenities at us, speeding around the city and banging on the steering wheel. Eventually we got out of the taxi around the station area, with the driver shouting ‘fook you’ as we left. Eventually, we found our way and had the best meal we've had in ages.