The train journey was quite enjoyable. According to the booking list we had an entire four bed compartment to ourselves, but we were joined by an Indian couple who came and sat with us keep us company and to stop 'nasty people' from sitting there.

They were on their way to Udaipur to visit some of their extended family. They talked about their life in India - they live with their two daughters and sons in law as well as their grandchildren and servant in a 3000sq ft house just outside the city. Indians think nothing of asking questions that most in the west would shy away from such as salary and religious information. He was shocked that on a Westerners salary I was unable to save anything because of he high living costs in London, I said this was because Tabi costs a lot and he noded, knowingly. ;-)

People we met on the train

We arrived in Udaipur at about 7am and promptly found an autorickshaw to take us to our hotel. The hotel is nice and has an internet cafe and a normal cafe upstairs. This place is very different to the cities. The streets contain as many stray cows and dogs as they do people, and shopkeepers would rather stop us for a chat than rip us off. The local women don't scowl at Tabi, and no one stares at us as we go by.

We had a quick breakfast when we arrived, followed by a short nap. Then we found an autorickshaw to drive us out to a local villiage where we hopped on a camel and were shown around. The inhabitants sang songs to us from inside their cow dung huts, but I was too distracted by the buckarooing camel to take too much in.

Villagers performing for us. Not a very well composed photo, but have you ever trried taking a photo from on top of a camel??

We then went to a local 'animal reserve', the name demonstrating a remarkable lack of self knowledge, as there were no animals to be seen. It still had some spectacular views, and we got some nice pictures. 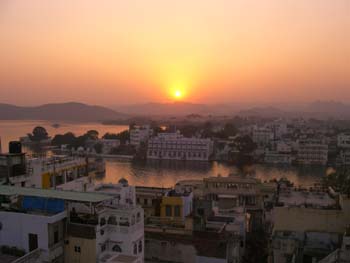 Posted by roblist 05:17 Archived in India

thanks for explaining who was who on the camel-I wasn't too sure at first!!!