I finally managed to get to sleep before 6am last night, but even so we didn't rise until noon. As today is our last day in Mumbai we had a few jobs to do which have taken most of the day.

I packed too many clothes, so I've posted some back to the UK to lighten my backpack. Posting the parcel took about 4 hours start to finish.

The first step is finding some post wallahs, who stitch canvas around the parcel and address it. The next stage was taking Tabi's parcel to the airmail desk. There was a long que in a building with no air conditioning. By the time we got to the front of the que there was someone trying to push in behind me - this didn't go down too well with the person behind me and by the time we left the counter several people were shouting and throwing punches at each other. I found it all very amusing, Tabi less so. 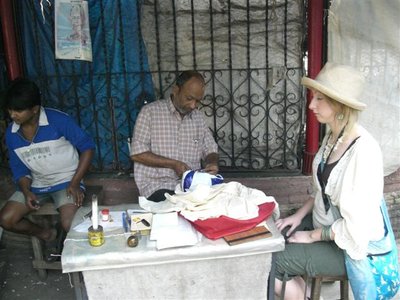 My parcel is going to be sent by sea, so I had to que again at another counter. Apparently I needed an export licence to send it, so I filled one of those out. The post wallah had left the top of the parcel open for customs to search through, which they did. The officials took great delight at passing my posessions around, and everyone had a go on an air horn I picked up from a market stall earlier. An 'official' post wallah then un picked the stitching from the canvas from around the parcel (one stitch at a time), and then stitched it all back together again. I thought it looked neater the first time around, but decided to keep quiet. Finally, the customs officials gave me my export licence, applied wax to the seams of the canvas and now the parcel is waiting to be shipped.

We're booked onto a train at 9:50pm to take us overnight to our next stay in Ahmedabad; until then we're lazing around. Tabi's writing her blog next to me, and is just about to put her first entry live.

We have some great photos that I want to share, but it doesn't seem possible to get them off the camera's memory card and onto a CD here, so it may not be possible until Singapore.

Posted by roblist 04:31 Archived in India

About me not being amused by the men throwing punches at eachother in the post queue..Rob neglects to mention that one of the punches actually hit me square on the nose! Luckily he was a weedy little guy so it didn't hurt much but he really couldn't care less that i got caught in the line of fire

That was what I found funny :-P
Her cheek didn't even go red, so it couldn't have been much of a punch! I missed it all, otherwise I'd have tried to get an action shot for the blog!